It’s Official: Summer is the happiest time of the year! - Embodied Living
Skip to content

The time of the year in which most people are happiest is summer, because of the brighter blue skies, warmer temperatures and longer days.

Back in 2015, nearly 150 adults aged 18 to 74 participated in a revealing study, which asked them to reflect on their own personal happiness over the course of the seasons and looked at times of the year when they were happier. Results showed that January and February were the least happy whilst summer months shot straight to the top of the scale.

Just over half of all respondents identified the clocks going forward as a factor in their experience of happiness, whilst two thirds identified brighter skies.

The survey also looked at what activities people find effective in cheering themselves up when they feel a bit down or unhappy:

Both men and women rated reflecting on the good things in life, making a conscious effort to stop feeling unhappy and try to feel positive as well as setting realistic goals and planning ahead as effective in cheering themselves up.

Overall, 87 percent of people said that they were their happy times of the year, and this was closely associated with the quality of the light in spring and summer.

Sue says: “It makes sense that we feel happier in spring and summer. Whilst most people agree these are the happiest times of the year, it’s noticeable that people aged 55 to 64 don’t agree with this. This suggests that, as we get older our sense of happiness comes more from within.” 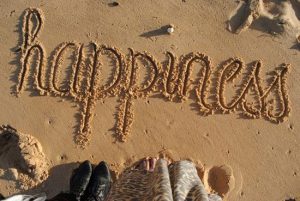 When it comes to what people can do to cheer themselves up, clearly sex is very important to men, who perhaps tend to be more comfortable expressing themselves and having their needs met physically rather than verbally. Both men and women said that, for them, consciously trying to be positive, and tactics such as: “appreciating the good things”, “focussing on feeling positive” and “setting goals” could be effective.

Happiness is transient: the sun doesn’t shine all the time. But looking within ourselves can be a strategy to find lasting happiness.

This blog has been taken from a 2015 survey, which was conducted by Embodied Living (parent company of Embodied Counselling) assisted by research specialist, AR Consulting.